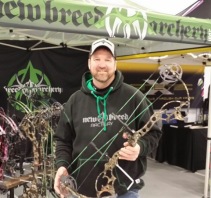 “I am always impressed with the superior quality and unprecedented customization process New Breed offers their shooters,” said Larry Goza. “Kyle Null is a one of a kind owner; he is always willing to help the staff in anyway he can, a leadership quality that is truly rare these days.”

Larry began shooting archery in 1987, turning pro in 1999. With 5 world titles and numerous tournament victories, Goza is a top talent in the competitive archery community.

“Larry Goza is a seasoned competitor and extremely talented shooter,” said Kyle Null, President of New Breed Archery. “Larry will successfully round out our professional shooting staff for the 2015-2016 season. We expect big things from him and believe he is an invaluable addition to our New Breed family.”

A fellow Alabamian, Larry Goza participates in many competitive archery tournaments throughout the year for ASA, IBO, Buckmasters and the National Field Archery Association (NFAA). When Larry is not grinding it out on the professional circuit, he can be found hunting and fishing across the Southeast. Goza will exclusively use New Breed Archery bows throughout the 2015-2016 circuits, with the CYBORG being his tried-and-true bow of choice.